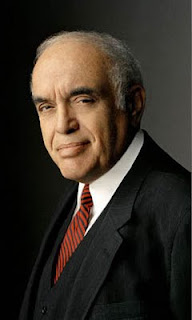 I discovered Robert Novak just a few years ago. I’m not one for watching cable news shows (I’d much rather watch the Discovery Channel) and was not exposed to his newspaper columns. He caught my attention when he released his book The Prince of Darkness: 50 Years Reporting in Washington

. What perked my interest was the section in his book where he discusses his conversion to Catholicism. Mr. Novak was raised Jewish, but lived most of his life without God. His life was his career. Over time as he grew older, he and his wife started to attend church and occasionally attended a Catholic church. The teachings of the Church drew him in, but he never took the big step of conversion until the Holy Spirit used a lowly student to bring him in when he was ready.

I loved his recounting of how he was invited to attend a university dinner and a student asked him a question about his faith. (I’m going on memory here – you’ll have to read it for yourself.) He told her he occasionally attended a Catholic Church. Her answer changed his life as she challenged him as to why he was waiting, life was short. The Holy Spirit spoke him and he converted.

I salute you Mr. Novak and pray the Divine Mercy Chaplet especially for you. Rest in Peace.