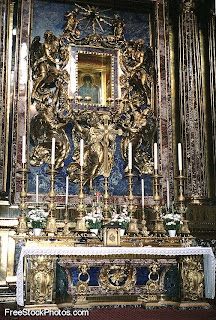 Several years ago, I was privileged to attend a Melkite Rite Mass. There are other rites besides Roman, and this Catholic Mass (completely in accord with the Pope) was just beautiful. It was at an evening retreat in a retreat center. I almost cried it was so beautiful. All I could think of was, “Why can’t we have that?” “Why do we have to suffer through such irreverent Masses?” “Why can’t we have such beautiful language?” The wording for the Mass could be so much more reverent and special…holy.

Of course, a lot of this has to do with the priest. If a priest is holy and takes his time with the Mass, and is reverent, then the mass will be too. I have attended Latin masses before and they were beautiful, if confusing. I had a lot of trouble following along, even with an English/Latin missal. But one question I have is why didn’t they just use the translation in that missal? The powers that be could have just have used that. There was no need to dumb it down or make it simpler, the average Mass goer is not that stupid. (OK, don’t say anything…)

There has been quite the buzz in the blogging community for a long time about changes in the Mass that will be coming. Otherwise known as “Liturgical Reform.” I’m excited because anything that makes the Mass more reverent and beautiful I’m for. Recently, there was the unveiling of the US Bishops website devoted to the changes coming in the Roman Missal. It shows the changes in wording that will happen in the future.

Now, when we talk about the future, the first thing that comes to our minds is exactly WHEN this will happen. Some people say that Advent of 2011, but we just don’t know. Lots of things have to happen first. Things have to be approved at the Vatican. Priests and deacons have to be trained, the faithful have to be catechized, music has to be revised, among other things. A most important reason also, is that the publishers of liturgical books and personal missals have to have finalized revisions so they can print, publish and promote the books that will be used. All of this takes a great deal of time. So, don’t look for the changes to be too soon.

Do check out the Committee on Divine Worship’s website for a comparison of current and proposed changes to the wording of the Mass. It has a lot of good information. If you have an interest in Liturgical Reform you might also find the Adoremus website interesting as well. Also, take the time to pray for all concerned.