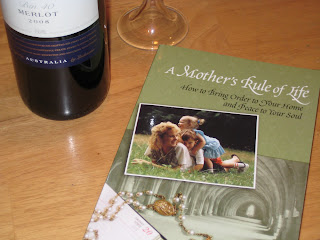 Well, I have been wanting to write about Catholic Book Clubs for DAYS, but we have been in DSL distress for over a week now. So, please forgive me for not posting. For the past couple of months we have had occasional Internet disruptions. Usually they have not lasted long. Last week, we started having longer breaks in service and had two different days when we pretty much did not have any service. We have called our DSL provider and they have been as helpful as they can be, but sometimes you just have to work from one diagnostic procedure to another until you figure out what is wrong. They have been here four times and so far, so good…for now. So let me pick up a post I was working on last week but was so rudely interrupted…

I have several good Catholic friends that I haven’t seen in awhile, and I was thinking one night about what I could do to get us together. Another bible study? Or perhaps a party? Neither really got me that excited. I wanted something where we had fun but it did not involve a lot of work, especially on my part. It would be nice to have husbands too since we never get together as couples… Nights or weekends might be better since I have several friends that work during the day. I wanted it to be more of a social event, but I’m not much of a party giver. Too much stress. And I wanted to do whatever it was on an ongoing basis.

Then it hit me. A Catholic book club. It is a great excuse to read and expose others to great Catholic books. The real reason however, was to have fun, to catch up with my friends… to socialize. We could perhaps meet new friends, too. I had an email together in a few minutes and a lot of people really liked the idea. All this came to mind as I was reading a recent post by Jennifer at Conversion Diary. She is planning on a mini Book Club with her readers and I realized that I wanted to share with you this whole idea of the Catholic Book Club.

So, what did I do to organize it? Well, I’ve learned from organizing bible studies that you need to invite lots of people in order to get a few. That is just the way it is. Especially, if people are scattered over wide distances. For us that means maybe 1/2 hour driving time. You also have to expect that the people who join will not always come. People will be out of town, get sick, have other commitments come up, etc. Years ago, I was always disappointed because a few people could not make it. I would try to change the date, but that would inconvenience other people. Once I finally faced reality that not everyone will come every time I was able to make a plan and have fun.

I decided to make the meetings on Friday nights, the second Friday of the month. Friday night seemed good since there is no school or church the next morning. Many people are really involved with their families on Saturday and so daytime would be out, and in the evenings people are recovering from their day at the beach or whatever. I thought the second Friday of the month would be good since holidays or school startings don’t seem to be then, etc.

We vote on which books to use. At first, I compiled a list of good Catholic books and asked people to vote by email. Now that we are meeting, I propose books to the people attending the meeting, and we choose a book then and there for the next month. Here are the books that we have chosen to discuss so far.

A Mother’s Rule of Life: How to Bring Order to Your Home and Peace to Your Soul

I’m Not Being Fed: Discovering the Food That Satisfies the Soul

Search and Rescue: How to Bring Your Family and Friends Into, or Back Into, the Catholic Church

Because we started during the Summer many were out of town or unavailable. Some people could not get babysitters. The babysitter point is important. For years we have had women’s bible studies or other studies, and always children are welcome. But since this is once a month, and more of a social event, the adults want to socialize without the children. Nursing babies are always an exception, of course.

We have the meetings in people’s homes and once we had a really small group and decided to have it at Starbucks. So far, since we are getting started, and had one meeting specifically discussing a book for women, we have not had husbands yet. I’m hoping we do that in the future.

Refreshments are fairly simple. When we had the book club at my house, I had cheese and crackers, wine, some fruit and cookies. We start about 7pm so everyone has had dinner and is not too hungry. Perhaps a dessert bar next time? We’ll see. I stuck my kids in the family room with a movie and computer games and they were great. Of course, they are 14 and 6, so that was not any problem. There are advantages to not having toddlers!

We do not have a specific format for discussion. Many of us usually make notes or outline in the book parts that specifically helped us or that we liked. So we start off with catching up with each other, open the wine, have some food and eventually we get to the book. If someone has not finished the book, we don’t mind at all. In fact, I always remind them that if they haven’t read the book come anyway. This is supposed to be fun, there will be no test at the end. 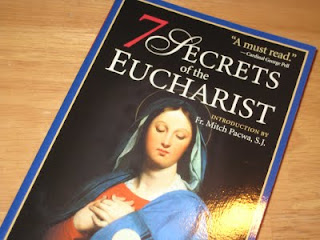 How do I choose the books to pick from? Well, I try to get several books that have topics that I think people will learn from, but are not too deep. Something they can finish in the month time period. I also look for popular books that I think people would like to read. No politics, period. I only choose from good Catholic publishers. I don’t want any books that will steer people wrong in their faith. So no dissenting authors. I also don’t want devotional books on the list. Those are better read slowly and prayerfully over a long period of time. Here are some of the books that I’m thinking of adding to the list for people to choose from:

7 Secrets of the Eucharist

The Mass of the Early Christians

The Fathers of the Church, Expanded Edition

Render unto Caesar: Serving the Nation by Living Our Catholic Beliefs in Political Life

Catholics and the New Age: How Good People Are Being Drawn into Jungian Psychology, the Enneagram, and the Age of Aquarius

Left to Tell: Discovering God Amidst the Rwandan Holocaust

I’m pleased the way things have worked out so far, though we have had to postpone a couple of meetings. You do need to remind people throughout the month to get the book early to have time to read it. And remind them of the date several times so they can get their schedules together. I’m always surprised that people say…”Oh, I thought it was next Friday!” or whatever.

So far it is a positive experience for all of us and I’m hoping it will continue in the future for quite a while. I’m interested to know if you have any experience with Catholic book clubs, or book clubs in general. Do you have any tips?

One Reply to “Starting A Catholic Book Club”