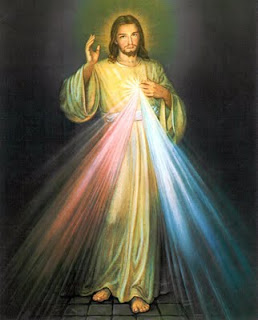 The main way that you grow in your relationship with Christ, and in the Catholic faith, is through prayer. Many people think that prayer is difficult, and they are intimidated by the thought of it so they don’t pray, or they only pray “stock” prayers like the “Our Father” or “Hail Mary.” Their relationship may not grow, so they get frustrated and give up. Prayer however, should be as easy as breathing. Talking to God as if he were your friend, concerned about you, is a start. Common devotions are also a help. Some of these common devotions are the Rosary, the Sacred Heart, or the Divine Mercy.

A friend of mine on Facebook, Vinny Flynn, posted the following today. I thought it was a beautiful way of prayer and I’m going to incorporate into my prayer time myself. Vinny is kindly allowing me to share it with you and I urge you to try it.

Several years ago I happened upon a method of praying that has become a daily practice. It began with the Divine Mercy image, the now well-known picture of Christ with red and pale rays streaming from His Heart. I had become accustomed to praying before the large image of the Divine Mercy that hung in my office, imagining myself in the midst of those rays as I intoned the familiar prayer, “Oh Blood and Water, which gushed forth from the Heart of Jesus as a fountain of mercy for us, I trust in you.”

On this particular day I was praying for a family member, and I found myself mentally placing him in the rays, asking the Lord to let him stay there all day to be soaked and saturated with grace in this outpouring of God’s mercy. Looking for a way to remember this intention throughout the day, I dug up a photo of him and stuck it in the corner of the frame so that it was right below the rays – a visual reminder that would prompt me to renew my prayer each time I looked up and noticed it.

It made my prayer seem so much more real that I soon purchased a much larger, unframed image. I glued it to a thick piece of cardboard and, within a few weeks, there were pictures tacked all over it: my wife and children, other family members, the Pope, special friends, anyone I wanted to remember to pray for.

A variation of this photo prayer soon emerged. My wife and I decided to assign a specific day of the week to pray in a special way for each of our children (very easy to do since there are 7 of them). So we gathered photos of each and set up a little “prayer table” on which we could display a different photo each day. This became especially powerful during Lent, as it prompted me to also give up something specific for each child on his or her prayer day.

But as meaningful as these two types of prayer were, the next variation that evolved proved to be the most fruitful for me and has become a permanent part of my daily prayer life. Years earlier I had learned that praying the Liturgy of the Hours (the 4-volume set of prayers known also as the Divine Office) is not reserved exclusively for priests and religious, but can be a fruitful practice of daily prayer for laity as well. I especially love to “pray the Office” in front of the Blessed Sacrament during Eucharistic adoration. One day, concerned about a friend who was in need of prayer, I found a photo of her and put it in my breviary so I would remember to pray for her the next morning at adoration. It was the first of many photos that I now keep in my breviary.(It doesn’t have to be a breviary; any prayer book or prayer journal would serve the purpose just as well.)

How do I pray using the photos?

I just look at them. “Prayer,” wrote St. Therese, “is a surge of the heart.” I just look at the pictures, one by one, and let my heart surge to God for each person. A photo captures much of the essence of a person. As I gaze at each photo, the person it represents becomes present to me, complete with personality traits, strengths, weaknesses, memories, conversations, specific needs, etc. Sometimes actual words of prayer come to mind and are offered; sometimes there are no words. Essentially I am simply lifting each person up to God in whatever way and for whatever period of time seems called for. It varies from day to day. Sometimes a brief glance and momentary entrustment of the person to God is sufficient. At other times, the same photo may bring a flood of thoughts and a longer period of prayer. I just let it happen, trusting that the Holy Spirit is directing it all.

I am now in the habit of carrying a small digital camera with me when I travel; and when someone asks for prayer, I say, “Sure! Say “cheese.”

If you have ever watched the lovely Divine Mercy Chaplet on EWTN at 3pm then you have seen Vinny and his family, who sing the Chaplet. It is beautiful. Vinny’s website is MercySong.com and he wrote one of the most profound but simple books I have read entitled The 7 Secrets of the Eucharist

St. Maria Faustina Kowalska, through whom Christ brought us this wonderful devotion, wrote a profound diary that you will find here: The Diary of St. Faustina