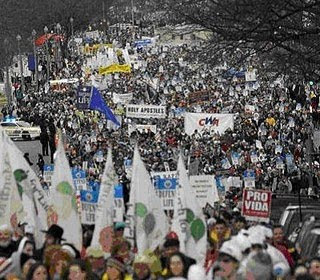 I find it a travesty that such a large March for Life in Washington, D.C. is deliberately ignored or worse, distorted by the so-called Mainstream Media. This article from the National Catholic Register sums it up: March for Life Final Update – Media Lies by Steven Greydanus. The comments are also worthy of reading too, from the people who were actually there. It is really no different from last year. How many people heard on their local news about the many LOCAL Marches for Life around the country, too?

Looking at the quantity of marchers in D.C. and the fact there is a vast sea of young people, especially young women, the “pro-choice” legislators and supporters around the country should take note and realize that these people are learning very quickly that their voices are being deliberately squelched and they will not tolerate it any longer. If the media are determined to lie, they will pay the penalty by being distrusted and ignored. Perhaps that is why Fox News is now number one and CNN one of the lowest rated.

These young people will be in charge soon, and hopefully this will be a boon to our country and our world. And of course, to the millions of children who may be aborted if substantial change does not occur. To those who are soldiering on in the face of what seems like overwhelming obstacles – keep going – your sacrifices are not in vain.