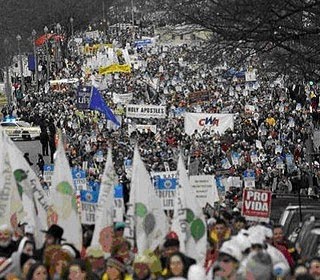 Today is the March for Life.  Pay attention. How many networks, newspapers or news outlets will even mention it?  Hundreds of thousands of people will march on Washington.  So many people will be there it will take hours to walk the route…how many outlets will mention it?  And when they do, will they show the 5 counter-protesters as a big group?  Last year the mainstream media distorted the story by saying “thousands” showed up.  That they couldn’t see young women there, when the crowd was made up of enormous amounts of young women and men.

So pay attention.  Remember, the people who are there represent many more people who want to be there but can’t.  They represent the future of America.  How long will the news media try to hide this movement for Life?  And how long will we tolerate that?