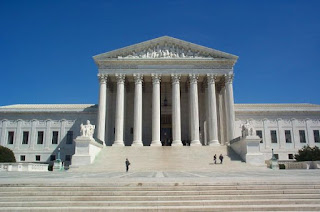 In light of today’s Supreme Court ruling, I wanted to tell you something that I thought of when I awoke this morning. I think it is important to remember that even though things seem to be getting worse day by day and hour by hour in our society, both here and abroad, we have to remember that God has a plan.

Frequently, when God has a plan things get worse for a long time before things are made better. It seems like human beings don’t really “get it” until something becomes truly horrible – when a true impression is made. Roman society slipped downhill for hundreds of years and it took hundreds more to rebuild from the decadence and hedonism and evil that went on then. That is happening now. And we have to trust God and his plan. With so many fronts being made – refusing conscience clauses, pushing gay marriage, millions of babies dying in abortions, etc. we have to trust God and His plan, and stand firm.

We have to pray and try to see how we as individuals, and as communities and societies, fit into that plan. When even Oreo cookies are against us – and Target, Starbucks, JCPenney, etc. have sided against traditional values, we have to remember that God is in our corner and we have to trust him to lead the fight. So don’t be discouraged, because God is much bigger then the Puppet-with-a-Hidden-Master-Obama, Pelosi, and the like. God is in control. 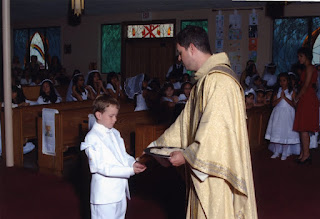 I was reading a post from one of my favorite priest bloggers Reverend Know-it-All. He has a great blog today about completely re-doing the way they do religious education in his parish. I could have stood and cheered. CCD, the way it is usually done today, does more to push kids away then draw them in and make them want to love Christ and His Church. He wants to completely change it. I wrote him a comment I wanted to share with you. Read his post then come back here! This is what I told him:

Can you hear the applause!!!!!! At least from me. I’m so proud of you to stand up and say what needs to be said.

I grew up in Catholic elementary school until 5th grade and then left for public school and the Kum-bye-ya School of Catechism (aka CCD) in the early 70’s. I learned God is love and pretty little else. I did not know the Eucharist was really not a symbol until my convert mother-in-law told me after I married my divorced protestant husband. (It all worked out in the end and we convalidated our marriage a few years later.)

Never was I told that my soul was all important and that I was to have a deep personal relationship with Jesus and that He would change my life. (I’m still working on that one.)

All I remember from my Confirmation time was the fact the SSJ sister would not let me use the confirmation name of Lydia because she said it was not a saint’s name. She was pretty upset when I brought her evidence Lydia was St. Paul’s first European convert. At the time my attitude was “I showed her.” Instead I should have been counseled that I really should pick a saint that I had great admiration for because of their heroic virtue, not because I got the name from a Gothic romance novel I was reading at the time.

You are SO correct that CCD is a waste of time for so many kids. Our former pastor wanted to delay Confirmation until the fall of the kids’ 9th grade year to keep the kids in CCD and the mandatory(!) Youth Group for a longer time, instead of letting them receive in 8th grade. Well! You would have thought the sky was falling how ticked off the parents were that the kids still had to go to Religious Ed for an extra 6 months! Some left the parish and others waited it out until the pastor moved to his new assignment and a new pastor came in and put the schedule back to where it was before. No where did anyone really mention that Religious Ed should be a life long endeavor and that you can’t stop learning about your faith. Our bishops use the sacraments as a carrot to get you to continue in Religious Ed as long as they can get you to come, knowing the minute it ends you won’t come back.

And rarely in Church do I hear that you should have a great love for the Man who loves you best. The “personal relationship with Jesus Christ” the protestants talk about.

I read about the early Christians and how even children were martyrs for the faith. Where is that faith now? Perhaps you see it in China or the Christians in the Middle East that are persecuted, but it is a rare thing here.

We sacrificed a lot to send our oldest to our poor little parish school which eventually closed the year my son graduated 8th grade. He moved onto Catholic High School and will graduate this coming year. He knows quite a lot about Catholicism. Does he or his friends have faith – no. The school tries I think, but it is hard to overcome a culture. And you are right – Catholic schools are essentially private schools for middle class kids. Parents sometimes almost go bankrupt to send their kids there. Is it worth it? I’m not sure. We wanted a good “Catholic” education, but more importantly did not want him in the gang and drug infested public school with the high percentage drop out rate. It is a great well-run family school and we are blessed to have him there, but will he have faith – time will tell.

My other son is 9 and in a charter school because we just could not afford two tuitions. The CCD people try, but I was told by people in the know that if I wanted to homeschool him for CCD it would be better. Many of the CCD teachers are teens – is that really what we want?

I think we should give the sacraments as babies (except Confession) and then instill in people that learning about Christ is life long. Then support it by having good programs: bible studies, studies on Church documents, programs to teach Lectio Divina and other ways of prayer (if you see how many people sign up for Centering Prayer programs and Christian Yoga you see the hunger people have – why not give them real teachings instead of crap.) What it really takes is strong decisive bishops and priests who are not afraid. We are seeing more of that and hopefully in the future things will change and other priests/bishops will get just as ticked off as you. The problem is the present. How many souls will be lost because we have to do this silly CCD model and we have at least two generations with a religious education of fluff.