This is from the Office of Readings from the Liturgy of the Hours for today on the iBreviary app. I found today’s readings very helpful and profound for meditation during Lent.

From the Mirror of Love by Saint Aelred, abbot (His writings are considered among the finest produced in England during the Middle Ages. He died in 1167 AD.)

Christ, The Model of Brotherly Love

The perfection of brotherly love lies in the love of one’s enemies. We can find no greater inspiration for this than grateful remembrance of the wonderful patience of Christ. He who is more fair than all the sons of men offered his fair face to be spat upon by sinful men; he allowed those eyes that rule the universe to be blindfolded by wicked men; he bared his back to the scourges; he submitted that head which strikes terror in principalities and powers to the sharpness of the thorns; he gave himself up to be mocked and reviled, and at the end endured the cross, the nails, the lance, the gall, the vinegar, remaining always gentle, meek and full of peace.

In short, he was led like a sheep to the slaughter, and like a lamb before the shearers he kept silent, and did not open his mouth.

Who could listen to that wonderful prayer, so full of warmth, of love, of unshakeable serenity—Father, forgive them—and hesitate to embrace his enemies with overflowing love? Father, he says, forgive them. Is any gentleness, any love, lacking in this prayer?

If someone wishes to love himself he must not allow himself to be corrupted by indulging his sinful nature. If he wishes to resist the promptings of his sinful nature he must enlarge the whole horizon of his love to contemplate the loving gentleness of the humanity of the Lord. Further, if he wishes to savor the joy of brotherly love with greater perfection and delight, he must extend even to his enemies the embrace of true love.

But if he wishes to prevent this fire of divine love from growing cold because of injuries received, let him keep the eyes of his soul always fixed on the serene patience of his beloved Lord and Savior.

One of the benefits of being Catholic Book Lady on social media is that occasionally I unexpectedly get review copies of books. A nice perk I must say. A couple of weeks ago, I received a lovely little book by the wonderful author, Susan Tassone. Well known as the “Purgatory Lady,” because of all the books she has written about the topic, Susan has written several of her latest books about St. Faustina Kowalska and the Divine Mercy devotion. St. Faustina wrote the famous Diary which is the basis for one of the most popular devotions in the Catholic Church. It would not surprise me in the least if St. Faustina became a Doctor of the Church.

This latest book, Praying With Jesus and Faustina During Lent and in Times of Suffering, truly has to be my favorite of the ones she has written, and I will absolutely be praying with it every day this Lent. What I like about the book is that it is set up like a conversation between Faustina and Jesus using quotes from the book. Each day is short and simple with a prayer, followed by a section you can use during times of suffering. So many of us could have used this book in 2020.

Because it uses mostly the text from St. Faustina’s Diary, it is an incredibly profound book. Next to the Bible, Diary of Saint Maria Faustina Kowalska: Divine Mercy in My Soul is my favorite spiritual book, and sits right next to my bed. The Diary and the Divine Mercy devotion has been an incredible comfort during the extremely painful times our family has suffered this past year.

If you are looking for “a little something” to both challenge and comfort you in your busy life during Lent, this could be the book. You could also use this in addition to any Bible or other Lenten studies you may be participating in, which is what I’m doing. Order soon because Lent is coming fast. This is my second early book recommendation for Lent, so you can order your books to arrive before Ash Wednesday.

If you don’t have St. Faustina’s Diary, I highly recommend the leather-bound edition. Yes, it’s more money, but if you read it a lot, and yours is getting a bit long in the tooth (falling apart!) like mine was, or you want something that is more pocket-sized, it is worth the money.

Update: If you purchase the leather version of St. Faustina’s Diary from the National Shrine of the Divine Mercy, you will be supporting their wonderful apostolate. You also have the option of blue leather for the Diary, as well as the usual burgundy, and both have gold edging. I love this little book!

*Some of the above links lead to Amazon, and if you purchase with my links I would be very grateful, as it allows me to pay the fees to host this blog.

This is the first of an occasional series of meditations.

The crowds before Pilate wanted an earthly leader. One that would bring them power, glory & free them from the Romans.

In the Old Testament (1st Samuel, Chapter 8) the people rejected God as their king. They wanted a king like the other countries had. Even though Samuel warned them the costs of a king: taxes, being servants to the king, etc., they still wanted someone to lead them into battle, someone they could look up to and lead them to glory. They rejected their Creator, who made the universe and everything in it; the God who rescued them from Egypt and gave them a land flowing with milk and honey. How could they have thought that an earthly leader could protect them better than the creator of everything? They did not trust God. They saw the Red Sea part, they saw the pillar of cloud and the pillar of fire lead and protect them as they escaped the servitude of Pharaoh, but they still did not trust.

Then, after one thousand years of heartbreak, and longing for the promised Messiah, Jesus enters the world. Could He be the one they had waited for, the one to deliver Israel from the hands of the Romans? The one to make Israel great and powerful? But then they watch and listen to Him. Sure, he heals people and is popular, but his sayings are hard. And confusing. Love your enemies? (Matthew 5:44) Eat his flesh and drink his blood? Many leave following him because they can’t accept that (John 6:66.) This is not the guy they were expecting. This is “not the sort of king they wanted.“¹

They wanted power, glory and freedom, but they didn’t understand that Jesus is the only one that will bring them true power, true glory, and true freedom – the freedom from sin. It is only because of our hardness of hearts that we don’t recognize how awful sin is – how it separates us from God. How sad God must be that His beloved people reject Him.

We just recently celebrated the feast of Our Lady of Fatima, and will celebrate the 100th Anniversary of her apparitions to the children of Fatima, for most of this year. During the apparitions at Fatima, Portugal, our Blessed Mother, and the angel that preceded her, made it clear that many souls have lost faith and trust in God, and many will be lost. They don’t follow God or even acknowledge Him, they don’t believe in him, and therefore will not be saved. We need to pray for them. Our Lady told us we need to pray and sacrifice as reparation for the sins of the world. It is all our sins that cause the chaos in the world. It is our sins that cause war and famine. Learn the message of Fatima, pray the Rosary for peace around the world. And pray that the world will accept Jesus as their real King. 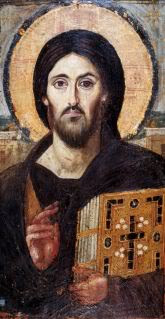 1 2 Hear me, O coastlands, listen, O distant peoples. The LORD called me from birth, from my mother’s womb he gave me my name.
2
3 He made of me a sharp-edged sword and concealed me in the shadow of his arm. He made me a polished arrow, in his quiver he hid me.
3
4 You are my servant, he said to me, Israel, through whom I show my glory.
4
Though I thought I had toiled in vain, and for nothing, uselessly, spent my strength, Yet my reward is with the LORD, my recompense is with my God.
5
For now the LORD has spoken who formed me as his servant from the womb, That Jacob may be brought back to him and Israel gathered to him; And I am made glorious in the sight of the LORD, and my God is now my strength!
6
5 It is too little, he says, for you to be my servant, to raise up the tribes of Jacob, and restore the survivors of Israel; I will make you a light to the nations, that my salvation may reach to the ends of the earth.
7
Thus says the LORD, the redeemer and the Holy One of Israel, To the one despised, whom the nations abhor, the slave of rulers: When kings see you, they shall stand up, and princes shall prostrate themselves Because of the LORD who is faithful, the Holy One of Israel who has chosen you.

I was particularly struck by verse 3:   “He made of me a sharp-edged sword and concealed me in the shadow of his arm. He made me a polished arrow, in his quiver he hid me.”

Usually, when I picture Jesus I see the Sacred Heart or the Divine Mercy, which are “soft,” gentle pictures – but really he is a strong figure.  He is more like the “Pantocrator” above, which is a 6th Century icon from Mt. Sinai in Egypt.  I have this picture, on wood, in my home and it is my favorite picture of Jesus.

If I think of Jesus as a strong, confident King – along the lines of King David – I find that I have a greater reverence to Him.  It seems to be easier to follow this Jesus.  He has everything in order.  His battle plan is ready.  He is my leader and I am in his service.  He has a mission for me that only I can do.  One that He has created from before I was born.  I need to be faithful and strong in the face of the enemy.  I also need to show honor, reverence and adoration to my King.

It is hard to follow a wimpy Christ, but when I think of my Savior and my King as he is – the Creator of the world, who holds the world and it’s creatures in the palm of His hand – I know that I have a strong leader.  A leader who I can follow, and to whom I am also accountable to.  It is harder to try to escape my duties or make excuses to a King who is a Sharp-Edged Sword.