It seems sometimes that Lent lasts forever, or maybe it is just the trials everyone seems to be going through this Lent, that it appears that way.  Since Lent feels like it is lasting a long time, I thought I would give you a few more Lenten resources that could be helpful to you:

Eric Sammons at The Divine Life blog posted this wonderful speech given by Daniel Cardinal DiNardo of Houston/Galveston at the Convocation of Houston Baptist University
What is great about this is the excellent unpacking of John 14:6 (”I am the way, the truth, and the life.”)  I found his scholarship and faith riveting and enjoyed watching it very much.

Edward Pentin at the National Catholic Register has a link to a beautiful panoramic virtual tour of the Church of the Holy Sepulcher in Jerusalem, the church that marks the place of Christ’s death and resurrection.  The detail and clarity of the tour is marvelous and you might find it helpful in meditation. 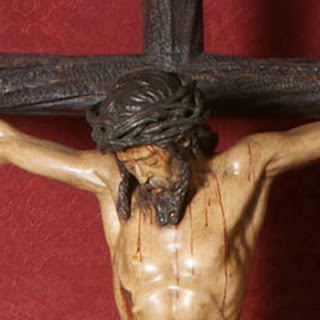 I wish I could remember where I found this in my travels online, but here is a link to the National Gallery of Art in Washington where they have a beautiful exhibition until the end of May called “The Sacred Made Real: Spanish Painting and Sculpture, 1600–1700”  Click on Exhibition Highlights to see a beautiful slideshow of this sacred art.  These stunning works would also be wonderful for meditation and each has a brief explanation that is very helpful.

If you need a good laugh, this is just a great video and I hope you enjoy it. It is a group of High School students as “Silent Monks” singing the Hallelujah Chorus.

Thanks so much to Creative Minority Report for passing it on. I hope y’all are having a good Advent.

This is a great video! My parish needs one of these! Look how many guys it takes to do this. Thanks Patrick Madrid for passing it on.

Update: My pastor, Fr. Alejandro Roque, OMI has been to this Cathedral and has seen this. He says it is phenomenal. The coals inside it glow bright red and as it swings it looks like a comet going at great speed. I really would love to see it now.

This past Friday, November 20th, a group of Catholic, Orthodox and Evangelical Christians issued a document called the Manhattan Declaration: A Call of Christian Conscience. This document originally signed by over 125 prominent religious leaders, is a 4,700 word call to Christians to stand by their convictions and not abandon their consciences when it comes to the defining issues of our day.

Normally, I don’t include any political references in this blog simply because others say it much better than me, and my forte is resources not politics. But I feel this is an important document and I have signed it. If you are interested in learning more, or in signing it (and the names are kept private) I urge you to visit The Manhattan Declaration website or their Facebook Page. The entire text and also the names of the original signers are here.

I was glad to see that several important Catholics, including bishops and cardinals have officially signed it. Their names are: