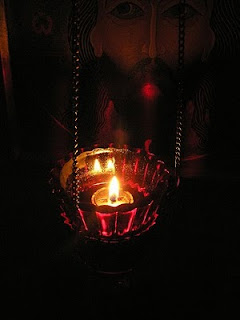 Ever since I came back to the Church 14 years ago, I have been interested in learning how to pray well.  I always seemed to be grasping at straws though.  At first, prayer was a quick spontaneous message to God or short written prayers.  I recently found a piece of paper with those little Morning and Evening Prayers that I had stuck in a book. They were nice little prayers and a good place to start.

Next, I had to relearn the “Our Father” since I could only remember part of it, and I needed a booklet to learn the Rosary, with a little refresher course on the “Hail Mary.”   For a long time however, I was pretty dissatisfied with my prayer.  If I had been more disciplined that would have helped, but I knew there was something more – I just did not grasp what it was.  Some people said that that was all there was.  You talked to God, maybe listened for some sort of feeling, and that was it.  You were not to expect anything that awe inspiring.  Oh…maybe there were some people who did, but they were extraordinary.

I wasn’t really comfortable with this answer.  I generally felt that there had to be more.  That there was a relationship with God there, but I needed to find it.  I just did not know how.  What did you do to get closer to God?  Oh, you followed the Commandments as best you could and you went to Church but….there was something else…but what?

I read lots of books on prayer and they were all very nice.  I had some lay spiritual directors, but they were not very well trained and I was left disappointed.  The books said to just talk to God and I did this.  I talked to him in the car, and when I did stuff at home. I tried to find a consistent prayer time to spend with Him. I went to Eucharistic adoration and daily Mass at times.  I read the bible and tried to get “lights” from it, which is reading a passage and seeing what strikes you and what it says to you in your heart.  And yet something was still missing.  I knew there was more.

Then, one woman I saw a couple of times for spiritual direction was actually pretty helpful and suggested that I read Fr. Thomas Dubay’s book Fire Within: St. Teresa of Avila, St. John of the Cross, and the Gospel-On Prayer

.  I had thought that this was a book that was going to be too difficult.  That it was for someone who was advanced spiritually.  St. Teresa of Avila would be hard.  She would be so lofty and and above my head that I would just be wasting my time.  The spiritual director though, told me that that was not the case.  And while someone who was just beginning might not want to delve into it, it would be a good idea for me to read.  She was right.

The basis of this book is that these two saints, especially St. Teresa, really think it is necessary to learn what you are striving for in prayer, where you want to go.  Kind of like a road map or a picture of where you want to travel to.  If you have no idea, how will you get there?  It is VERY helpful.  It is not the kind of book you read in an afternoon.  You take it in small bits and think about it.  St. Teresa and St. John explain about what you are aiming for – and that is Contemplation, which is a true gift from God. It is not a technique – it is something God gives you.  This is not an Eastern form of prayer, this is true Christian prayer and it is what I knew there had to be.

While I am reading this book – and I’m still reading it – albeit slowly , I discovered a few weeks ago that Fr. Dubay has some audio series on EWTN about prayer.  The two I’ll mention to you are Contemplation and Prayer Quest.  You can listen to these free MP3 series (13 half-hour shows each) either online, save them on your computer to listen to later, or save and transfer them to an MP3 player.

Fr. Dubay’s series on Contemplation is just excellent.  I listened to it while I was in the car, and you can’t get any better explanation on this form of prayer than here.  He really goes in depth about what it is, and how to recognize when Christ is calling you to a deeper form of union with him, and how to foster this in your life.  It is a pretty complete package.

Prayer Quest discusses our thirst for God, what are the impediments to growth in prayer, mediation, and time pressures among other topics.  I have just started to listen to them and they have already helped me a great deal.

Karen over at CatholiciCast has Fr. Dubay’s series laid out for you to see easily here and here.

You might also find helpful,  Prayer Primer : Igniting a Fire Within

by Fr. Dubay.  This book is simple,  especially for beginners, but everyone would benefit from it.

Remember, prayer is a journey that you are on until you meet the Lord face to Face.  You will have missteps, fall-backs, confusion and the occasional frustration, but if you keep at it you will progress.  You need to have a willing heart, more silence in your life and helpful reading such as the Bible.  Don’t give up, just keep trying and God will provide.