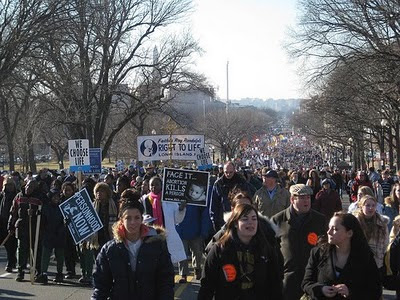 January 22, 2010 will be the “March for Life” in Washington, D.C. As in previous years, coverage by most news media will probably be very sparse to non-existent. EWTN however, will cover this event LIVE as well as the “Walk for Life West Coast 2010″ on January 23rd.

Pro-life organizations estimated the crowd last year at 200,000 at least – as you can see above.  Leading secular news media downgraded it to “thousands” or “tens of thousands’ and gave prominent time to a small handful of pro-abortion protesters who were rarely seen.

Click here to see EWTN’s complete coverage, both on the network and online, with live streaming audio and video.  This also includes all the special pro-life programming in January.