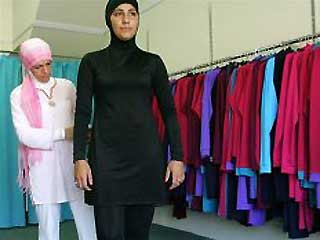 It’s hard to believe, but in France Muslim women who choose to dress very modestly are not allowed in the public pools. Apparently, the French authorities think that the women’s “burquinis” are a health hazard since they could be worn on the street. France, it seems, has very stringent rules for swimmers.

An article by the AP gives a bit more detail on what the French are afraid of: “These clothes are used in public, so they can contain molecules, viruses, et cetera, which will go in the water and could be transmitted to other bathers.

Don’t they use chlorine in their pools? So the average French woman is probably walking around the pool topless or almost naked but this woman, who chooses modesty is a health hazard. I guess the bikini clad ladies would be considered to be practicing “secular modesty.” 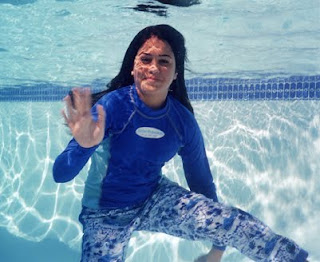 My town, which has pools everywhere and no one seems to mind if you go swimming in a T-shirt and shorts, also does not seem to mind this style of dress. Last month, my 6 year old had swimming lessons at our city pool and one of the girls in his class, who is Muslim, wore what looked like a jogging suit. It was very attractive and comfortable looking. She did not have head covering as she was probably only about 8 or 9 years old. You can’t wear “floaties” in the pool, but this outfit was just fine. No one was worried about viruses. I’m sure there are a few very modest Orthodox Jewish and Christian women who would like a similar swim suit. It seems that there are several businesses online that are filling this niche.

It is astonishing, but not surprising to me at all anymore, that people would be willing to ban modest dress by labeling it dangerous. The world is really turned around. Of course, the French are the same people that ban religious jewelry or headcovering in public schools and offices, to the point that the Catholic schools are filled with Muslims fleeing the public schools

What we need is more modesty not less.

UPDATE: If you find the French policy troubling perhaps you would rather go to England. Apparently, there are swimming lessons in public pools that will only allow you to attend if you wear a burquini.
Swimmers are Told to Wear Burquinis or not attend. Classes are for Muslims, separated by sex, and even men must wear trunks that cover from naval to knees. Others, including non-Muslims, cannot use the pool unless the required swimsuit is worn. Non-Muslims are outraged when they are told they can’t swim. I don’t know which is worse, but perhaps the French policy is better. It is one thing to inconvenience that one person, then the whole populous. What is the answer? Should the Muslims try to rent the complex when there are no public hours if they are planning on enforcing this policy? Should they build their own pool?